Spring, 1967: Disillusionment, anger and confusion bubble to the surface of the nation’s psyche. American youth are on the precipice of a social revolution and, for a few tumultuous days Ron Jones, a young, gifted, and charismatic high school history teacher attempts a startling social experiment that will inspire comment and analysis to this day – along with a TV movie (The Wave), a novel, and the 2008 award-winning narrative German film Die Welle (Sundance, 2008). In 1967, Ron Jones was in his first year teaching at progressive, upper-middle class Cubberley High School in Palo Alto, California. To explain the appeal of fascism in Nazi Germany, he created a classroom setting wherein students subjugated personal freedom to the good of the community, following almost without question. Replete with salutes and Gestapo-like informants, the so-called Third Wave soon attracted scores of students throughout Cubberley and neighboring schools, spiraling out of Jones’ control. This moving recounting by Jones, school administrators, former students, and Dr. Philip Zimbardo (Stanford Prison Experiment) enthralls with the force of inescapable conclusions, and demonstrates how its theme has only grown in relevance. 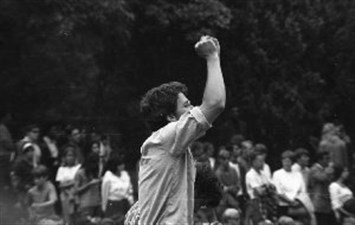