"Bring your tents! Bring everything! We will fill this plaza!", shouts 15-year-old activist Joshua Wong. He is appealing to a crowd of 120,000, assembled outside Hong Kong's central government buildings. "We want independent thinking! Say no to brainwashing!", they chant as they set off to march through the streets. They have gathered to protest the inclusion of 'National Education' in the state curriculum: an initiative drawn-up by the Chinese Communist Party, designed to foster patriotism and obedience to authority. "We all have a conscience", the high-school student explains. "And when we see they want to brainwash us, we have to come out against it." As the founder of 'Scholarism' – a grassroots alliance against the proposals – Wong has mobilised considerable support, and is now a minor celebrity in the world of civil disobedience. "They say, 'Joshua Wong to save Hong Kong!'" But his fame also has a sinister side. Following a high-profile protest at the Central Liason Office, he found he was attracting the wrong kind of attention. "If your phone has an echo, it means it's tapped", he reveals. "Someone's listening." With elections for the Legislative Council just around the corner, the debate quickly comes to represent the broader issues of single-party rule, and authoritarian interference. From vigils marking the Tiananmen Square massacre of 1989, to demonstrations against the appointment of CY Leung, this is an anatomy of dissent in a region yet to implement universal suffrage. But as a fellow campaigner straightforwardly puts it, "It'll all have been quite pointless if those who marched wait for the next Joshua Wong to lead them." 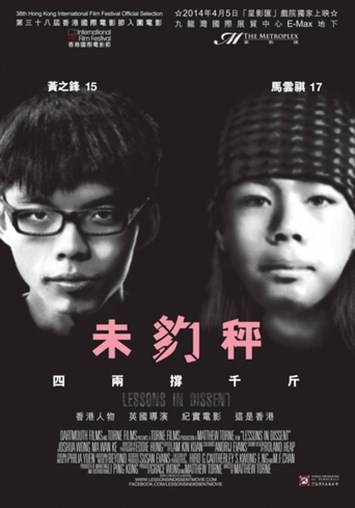