The story is about two good-hearted Samaritans Benny (Kay Kay Menon) and Babloo (Rajpal Yadav) who like the any other Indian are smitten by the glamour of Mumbai. After a brief stint as waiters, in a typical Mumbai style Irani restaurant, the two lands up in distinctly different jobs... Benny takes up a job of a bellboy in a suburban five-star hotel, whereas Babloo lands up as a waiter in a ladies service bar.Benny considers his job to be far superior to Babloo's and ends up making fun of him more often that not. Post a hilarious experience of the new jobs to start with; both gradually realize that they were actually in similar professions with two different exteriors, but the same interiors. Benny's pride starts fading with passing time when reality strikes.Benny witness innumerable social evils of the five-star hotel, right from drug abuse to political fiascos while Babloo meets the more human side of the otherwise condemned part of the society. And the truth dawns, that our system keeps a blind eye towards the Five Star Hotels while the Ladies Bars are constantly facing the wrath of the same. On the whole, writer-director Yunus Sajawal has trod the rough road and has added a new dimension to the raging debate... Are bar girls a bigger threat than terrorists?In short Benny And Babloo is a satirical comedy that throws light on the similarity between two sides of the same coin. The female stars comprise of Riya Sen, Shweta Tiwari, Rukhsaar, Anita Hasnandani, Richa Chaddha, Maushumi Udeshi and others. Produced by Umesh Chouhan under the banner of Chamunda Films, the film has music by Amjad Nadeem lyrics by Shabbir Ahmed. 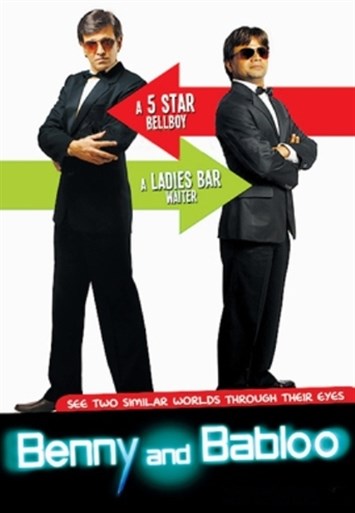