Co-produced by Academy-Award nominee Nina Rosenblum and her husband and partner, writer/filmmaker Daniel Allentuck, in association with Mary Engel, Ordinary Miracles: The Photo League's New York, narrated by Campbell Scott, is a documentary on the life and times of the Photo League, a legendary organization of amateur and professional photographers that flourished in New York City between 1936 and 1951. For Engel and Rosenblum, the film is an intensely personal undertaking inasmuch as their parents were influential members of the Photo League. Inspired by Lewis Hine and the photographers of the Farm Security Administration and with expert guidance from Paul Strand, Berenice Abbott and Beaumont Newhall, the Photo League's collective portrait of urban life during the turbulent years of the thirties and forties is comparable in spirit and quality to the imperishable record of rural America created by the League's contemporaries in the Farm Security Administration--scarcely surprising given that virtually every FSA photographer, including Dorothea Lange and Arthur Rothstein, were also active members of the Photo League. The core of the film is constructed around a selection culled from the hundreds of images made by approximately sixty individual photographers, woven into sequences around different subjects of League focus (Harlem, Pitt street, subway riders, kids at play, Coney Island, WWII). An important component of the film is the evocative soundtrack of vintage music: the Mills Brothers, the Ink Spots, Django Reinhardt, The Andrews Sisters, Coleman Hawkins, Charlie Parker. One memorable sequence is constructed around a rare recording of a lecture given by the press photographer Weegee (an important Photo League "discovery") entitled "How to Photograph a Murder" (helpful tip: "the stiff isn't going anywhere, you've got plenty of time.") Interwoven with the photographs are interviews with twelve former League members, filmed at a 50th anniversary reunion luncheon organized by the filmmakers in 1999. 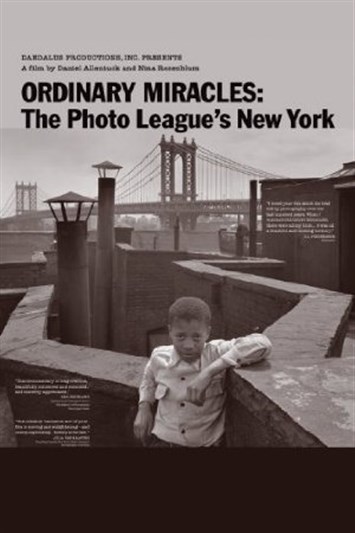