The unemployed Vivaan (Rajeev Khandelwal) and Siya (Tena Desae), like any other ordinary couple, are working hard to make ends meet. They win a chance to make a trip to the beautiful islands of Fiji in a lucky draw contest. Not only is this holiday fully paid for, with a stay at one of the finest hotels, but they also get invited to dine at Suva, Fiji’s finest resort for their wedding anniversary. At the resort they encounter the charming Mr. Khan (Paresh Rawal). Mr. Khan invites the couple to take part in a live game show named 'Table 21' which offers a staggering amount of money as the prize. The rules are simple. Eight questions will be asked regarding their personal life. All these questions must be answered truthfully, and they have to do the task assigned to each question. The questions first seem very easy to answer, but as the game goes on the tasks became horrid making Vivaan remember his past in college. His last task is to kill someone. When he sees his target he recognizes him from his past. In a flashback, Vivaan recalls that him and his friends ragged a boy (the target) named Akram so severely that he lost all semblance of sanity. Back in the present, it is revealed that Akram is the son of Mr. Khan and that Mr. Khan's intention was to show Vivaan and Siya the extent of the damage inflicted by their actions. The movie ends with Mr. Khan telling them that they are free to go but the sin of what they did will shadow them forever. 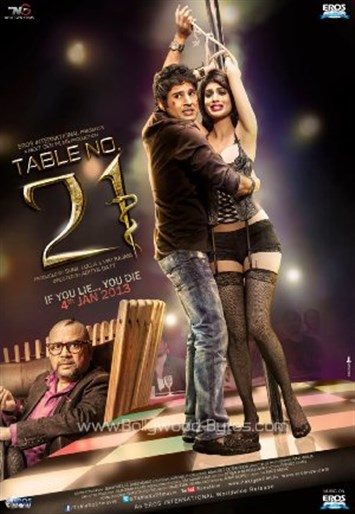