Two of the most beautiful women in the European cinema of the 1960s -- Brigitte Bardot and Jeanne Moreau -- team up under the direction of Louis Malle in this engaging comedy/adventure. Maria Fitzgerald O'Malley (Bardot) is the daughter of an Irish political dissident who has traveled to Latin America with her father to take part in an anarchist political uprising. When her father is killed, Maria, left to her own devices, happens upon a traveling circus, where she strikes up a friendship with one of the performers, also named Maria (Moreau). Maria O'Malley joins up with the carnival, and she works up a dance routine with Maria; the act is a smash hit, especially after the Irish Maria accidentally loses part of her costume during a performance. Despite their success, the two Marias find themselves increasingly distressed with the poverty and brutality of the peasants' lives, and they soon decide to use their talents in support of revolutionary leader Flores (George Hamilton). Viva Maria!'s original ending was trimmed slightly for its American release, but the complete version was later released in the United States on DVD. 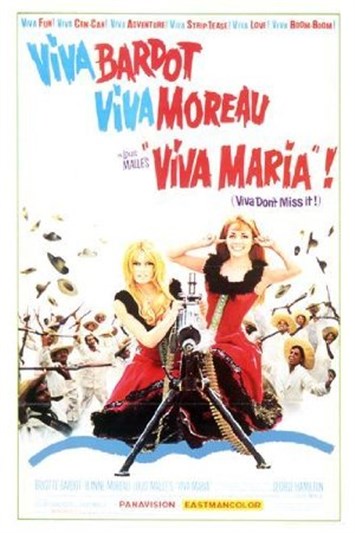