No other film so vividly documents one woman's descent into the hell of mental illness and homelessness as Begging Naked. What started as a quirky interview of a struggling artist turned into a heartbreaking odyssey spanning a decade as Karen Gehres documented her friends disintegration. Begging Naked began when Elise Hill asked fellow artist Karen Gehres to record her life on videotape. With straightforward honesty, Elise recounts how at age 15 she left an abusive home and wound up on the streets of New York as a prostitute, stripper and drug addict. Her sense of humor and striking face just barely conceal her pain. Years later she entered rehab and started selling her art, but soon returned to stripping, recreating graphic images from the clubs she worked in. But Mayor Giuliani's zoning laws put the squeeze on the sex industry in New York, and the film follows Elise as she wrestles with her uncertain fate. Drug abuse, isolation, mental illness, and eviction complicate her journey. This inspiring and heartbreaking film transcends its grim subject, gracefully creating an intimate portrait of a fascinating individual struggling to survive in a city that would prefer she didn't exist. 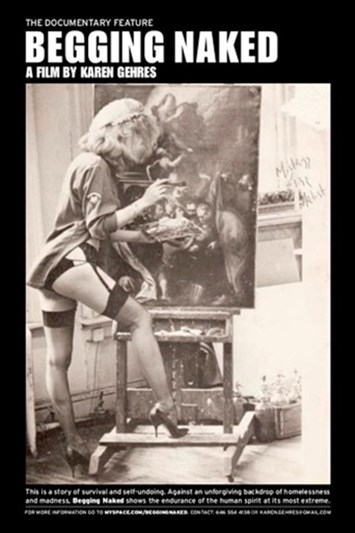